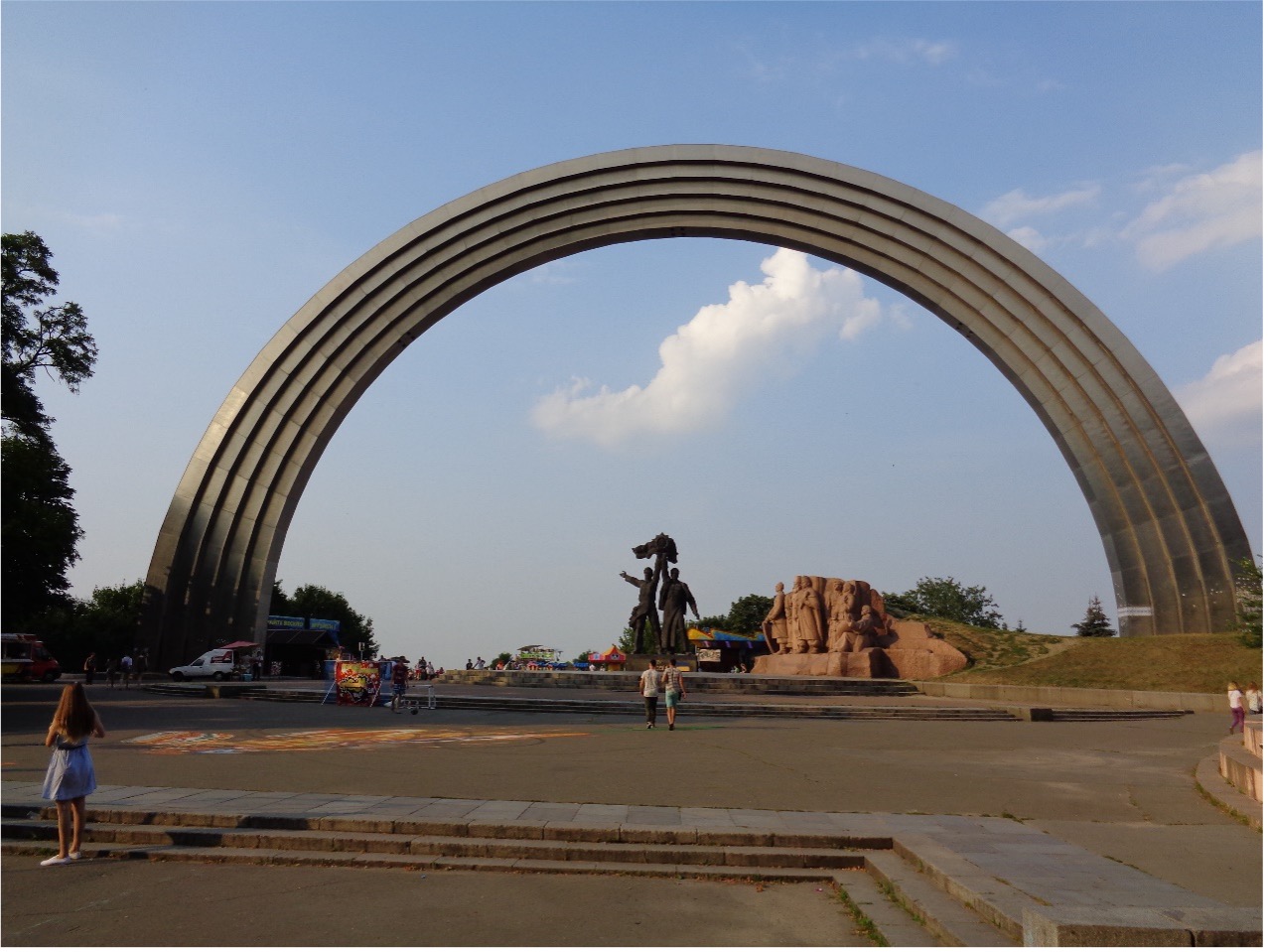 After the world stopped for two years during the pandemic, Russia began their invasion of Ukraine on February 24th, 2022. Since that fateful day, the two nations have been locked in combat: affecting all corners of the world and claiming the lives of many. The Ukrainian capital city, Kyiv, was one of the first two targets that was attacked by the Russian military forces. Despite the initial strike, the Ukrainians were successful in defending their city and forcing the opposition to retreat (Bigg, 2023).

Prior to this destruction, Ukraine and Russia were allied nations; symbolized by the People’s Friendship Arch located in Kyiv. The Soviet Union had gifted this dual installation to Ukraine back in 1982 (Treisman, 2022). This scene features two men raising a medal together as a grand arch towers above. They share a muscular build and don triumphant faces as they declare a union between nations (Figure 1).

In 2014, Russia had also raised tensions after the illegal annexation of Ukraine’s Crimean Peninsula. As reported by National Public Radio, “After Russia invaded Crimea in 2014…activists painted a large crack across the top” (Treisman, 2022). With these brutal displays of force, it is not surprising that Ukrainian officials made moves to dismantle the monument on April 26th, 2022. Tondo and Koshiw reported that during the removal process, the head of the figure representing a Russian worker was “accidentally decapitated and then deliberately dismantled to the applause of hundreds of people” (Tondo and Koshiw, 2022). You can find several pictures of citizens posing next to the severed head in opposition of the irony surrounding this oppressive monument (Figure 2; 3). Call it karma or sweet justice, the community has made their stance against oppressive monuments echo worldwide.

News reporters and journalists were able to document the sentiment of architect Serhii Myrhorodskyi. Myrhorodskyi was one of the original designers for this monument and showed no remorse for its destruction. He would rather see these figures melted down and transformed into a true symbol of unity for Ukrainians that celebrates their motherland. Vitali Klitschko, the Mayor of Kyiv, gave a powerful statement against the monument’s public presence. “You don’t kill your brother. You don’t rape your sister. You don’t destroy your friend’s country. That’s why, today, we have dismantled this monument, once created as a sign of friendship between Ukraine and Russia” (Tondo and Koshiw, 2022).

Although the two figures hoisting a medal are long gone, the Peoples’ Arch of Friendship continues to stand in Kyiv today. In a similar fashion as the Prague Metronome, there were divided opinions on whether to keep the arch as a reminder of the war between nations or to remove the structure entirely. Mayor Klitschko decided to remove just the figures to repurpose the significance of the arch for his nation and its citizens (Treisman, 2022).

The Mayor of Dnipro, Borys Filatov, announced that he would be renaming streets that were dedicated to Russian towns to reflect the interpersonal values of Ukraine. “Abkhazia Street became Irpin, while the street of the 30th Irkutsk Division is now called Ukrainian Soldiers” (Tondo and Koshiw, 2022). However, there has been some pushback towards the “de-Russification” of Ukraine’s facilities and properties. Ihor Seriivych, a resident of Kyiv, claims that there are world renowned Ukrainian and Russian creators that should continue to be celebrated in public spaces. “If it was a Putin statue I would understand, but you have to differentiate between enemies and world-famous literature” (Tondo and Koshiw, 2022).

Predicting this criticism, Volodymyr Bondarenko, the secretary of the Kyiv City Council, stated that the goal of this movement is not to erase or cancel Russian creators, but to tackle the challenge of oppression in public spaces. “No one intends to take books of Russian classical authors down from library shelves or forbid people to attend concerts of Rachmaninoff. But the matter of street names and memorials needs to be brought to a close” (Solomon, 2022).

Other targets for reassessment during the war were several memorials and monuments dedicated to Soviet Union soldiers throughout Poland. Prior to the Russia-Ukraine war, Poland had passed a countermeasure to oppressive monuments back in 2017. As reported by RFE/RL, monuments that “symbolize or propagate” totalitarian regimes are prohibited in the country if the object(s) are not products of artistic expression nor were constructed over the remains of fallen soldiers. To follow suit, the Council of the Ogre municipality declared that it would begin removing five memorial stones that were dedicated to the Red Army in their region late April 2022. One of which was the Soviet-made memorial stone in Latvia’s Madliena Parish. The memorial was the first to be officially removed on April 26th, 2022 (RFE/RL, 2022).

One month before the Council’s initiative, an illegally toppled Soviet monument in Koszalin was shattered prematurely on March 9th, 2022. The sandstone memorial featured a Soviet soldier embraced by a girl with a dove in hand (Figure 4). One month before the Council’s initiative, the President of Poland’s Institute of National Remembrance attended the removal of a Red Army Obelisk in Chrzowice, southwestern Poland on March 23rd, 2022. “There is no room for memorials and symbols marked with the red star in public in a free, independent, and democratic Poland, nor in a free Europe” (RFE/RL, 2022). Ergo, it is important to recognize the difference between what has occurred in Europe and the destruction of historical objects. The situation in Ukraine calls for the preservation of their own identity, accomplishments, and culture. It is the role of those in power to consider the implications of allowing oppressive monuments to remain in popular areas. Questions like “what will this instill in future generations” are more relevant than they’ve ever been, and through the brave efforts of community leaders and municipalities, the battle for public space continues.

Bigg, M. M. (2023, January 9). Russia invaded Ukraine more than 10 months ago. Here is one key development from every month of the war. New York Times. https://www.nytimes.com/article/ukraine-russia-war-timeline.html.

Київ Монумент на честь возєднання України з Росією 1: a monument in Ukraine, number: 80-382-0578. From this angle, one cannot see the crack that was painted by Kyiv activists after the 2014 annexation of the Crimean Peninsula.