As the oldest and one of the largest of the 110 National Committees of ICOMOS, the U.S. National Committee (now called World Heritage USA) has played a critical role in the conservation and protection of cultural heritage sites across the world for over half a century.

The roots of ICOMOS date back to the early 20th century. Prior to this time, architectural heritage and historic preservation were seen primarily as a national concern, with their scope rarely extending beyond any one country’s borders. However, in 1931, the League of Nations’ International Museums Office organized a meeting of international specialists to discuss the conservation of historic buildings. The conference resulted in the Athens Charter for the Restoration of Historic Monuments, which called for the establishment of national legislation to preserve historic sites and the creation of conservation organizations to protect our common world heritage—and with that, for the first time, heritage was thought of as a global concern that merited international conservation efforts.

The First International Congress of Architects and Specialists of Historic Buildings was held in Paris in 1957. The Congress recommended that countries lacking a central organization for the protection of historic buildings provide for the establishment of such an authority. It also recommended that all member states of UNESCO join the International Centre for the Study of the Preservation and Restoration of Cultural Property (ICCROM), based in Rome. The Congress agreed to have its second meeting in Venice.

Accordingly, in 1964, the Second International Congress of Architects and Specialists of Historic Buildings met and adopted a series of thirteen resolutions. The first created the International Charter on the Conservation and Restoration of Monuments and Sites, commonly known as the Venice Charter. The second, put forward by UNESCO, created ICOMOS to carry out this charter.

In June 1965, the Constitutional and First General Assemblies of lCOMOS took place in Warsaw, Poland, with delegates attending from 26 countries. From the very beginning, American citizens were intimately involved with the establishment of ICOMOS and its work in protecting international cultural heritage. The U.S. National Committee of ICOMOS, in turn, was organized a few short months after the Warsaw meetings, becoming the first of the National Committees to be set up under the ICOMOS umbrella. 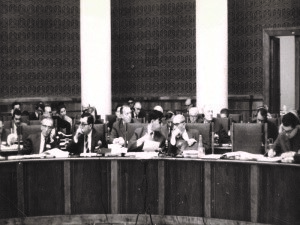 Americans attending the 1965 Warsaw meetings included Carl Feiss, Robert Garvey, Richard Howland, Charles Peterson, and Hiroshi Daifuku. Howland and Garvey can be seen in the 2nd row of the photo above.

In 1987, World Heritage USA hosted the 8th Triennial ICOMOS General Assembly and International Symposium in Washington, DC.  Meeting under the theme “Old Cultures in New Worlds,” the General Assembly attracted over 600 preservation leaders from around the world and remains the largest international undertaking ever conducted by World Heritage USA. 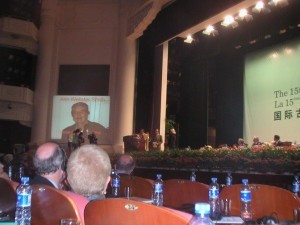 Two U.S. National Committee members have won the coveted Gazzola Prize, which is awarded once every three years by ICOMOS to recognize individuals or groups that have contributed with distinction to international cultural heritage. The first was Dr. Ernest Allen Connally, F.US/ICOMOS, in 1996. Pictured here is the presentation in absentia of the Prize to another American, Ann Webster Smith, F.US/ICOMOS, during ceremonies held in Xi’an, China in 2005. 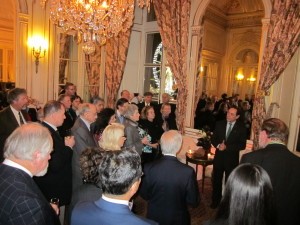 In 2008 at the 16th ICOMOS General Assembly in Quebec, Canada, Gustavo F. Araoz, Jr., F.US/ICOMOS, became the first American to be elected ICOMOS President. Pictured here is a celebration of the reelection of Mr. Araoz at the 17th Assembly in 2011 in Paris, France. Araoz was elected to a third term in 2014 at the 18th General Assembly in Florence, Italy.

As we head into ICOMOS’s next half century, World Heritage USA continues to be a proud member of the worldwide ICOMOS alliance and a vital bridge linking preservation professionals in the United States with our counterparts in other countries. As the only U.S. professional preservation organization with a global focus, World Heritage USA remains the gateway for U.S. professionals to participate in worldwide heritage conservation.