The work and achievements of Ann Webster Smith as a champion in building a global culture of protection for the cultural heritage of the entire world were prolific and varied. For three decades Ms. Smith was at the very core of the dreamers and doers who nurtured ICOMOS to its maturity, personifying a spirit of cooperation and teamwork. A true visionary never fearing change for the sake of improvement, Ann Webster Smith conceptualized, supported and enabled numerous cultural programs for international cooperation; influenced major decision-makers both in the United States and overseas towards the preservation ethic; steered private and public funds for the support of international preservation initiatives; and mentored dozens of young preservationists into their full professional capacity, gently leading them into key leadership positions.
Ann Webster Smith was the characterization of a model world citizen and an enlightened American. Oblivious to race, beliefs, gender or ethnicity, she was equally at ease with princes and common folk, treating all with the same respect and warmth, and earning her lasting friendships all over the world. She loved every place she visited, delighting in the material and intangible expressions of all the world cultures. The wake of benevolence that she left behind her was always one of good will towards Americans and the United States, making her our ideal citizen-ambassador. The Ann Webster Smith Award for International Heritage Achievement recognizes those U.S. citizens who carry on her work by embodying her lasting spirit and vision.

THE PROGRAM
The Ann Webster Smith Award honors an American individual, group of persons or institution, in the public or private sector, for extraordinary and sustained achievement in perpetuating Ann Webster Smith’s quest to make the United States a respected partner and trustworthy pillar to support the conservation of the cultural heritage in all parts of the world.

SELECTION CRITERIA
The Ann Webster Smith Award will recognize achievements in one or more of the following areas of activity as they relate to the international aspects of heritage conservation that Ms. Smith championed: 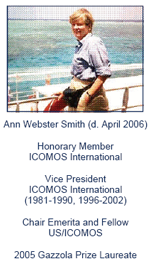 Nomination dossiers may be submitted electronically to jseiter@usicomos.org or mailed in hard copy to:

PROCESS OF SELECTION
The selection of the award winner will be made by a panel of five individuals, composed of three eminent American preservationists and two representatives of the Ann Webster Smith family
DEADLINE
All nominations for the 2018 Ann Webster Smith Award must be received in the office of US/ICOMOS by December 6, 2018.
PRESENTATION
The award will be announced at the 2018 US/ICOMOS Benefit Gala to be held in Washington D.C., on January 17, 2019.
The Ann Webster Smith Award is honorific in nature and carries no financial remuneration.