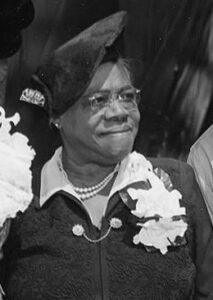 Welcome to the inaugural blog post of the Monuments Toolkit Project. In honor of Women’s History Month, I wanted to share some monumental news: the Mary McLeod Bethune Statue will be unveiled soon in the National Statuary Hall of the United States Capitol. Bethune’s statue is the first to honor a Black American woman. The news is especially poignant since she will represent Florida, a southern state.

The fact that Bethune  was able to advise presidents  is especially notable, especially when Jim Crow denigrated Black citizens and women had only had the right to vote for a few years.

Monuments have power and convey what a society should value. The fact that her statue replaced a Confederate officer is poetic justice. The Confederate statues were constructed after the Civil War and were established to promote the false narrative of the “Lost Cause.”  This false narrative was used to intimidate and alienate Black Americans from the full rights of United States Citizenship.

Our world and nation, in spite of the chaos, is in the middle of a paradigm shift. We are in a moment  when  serious considerations concerning monuments did not exist up until recently. For the next two years, Monuments Toolkit will elevate real-time conversations that local, national and international communities are having regarding  monuments of oppression and contested sites of conscience. It is our hope that this will help foster a conversation that is well overdue.