Frank Lloyd Wright and World Heritage in the United States 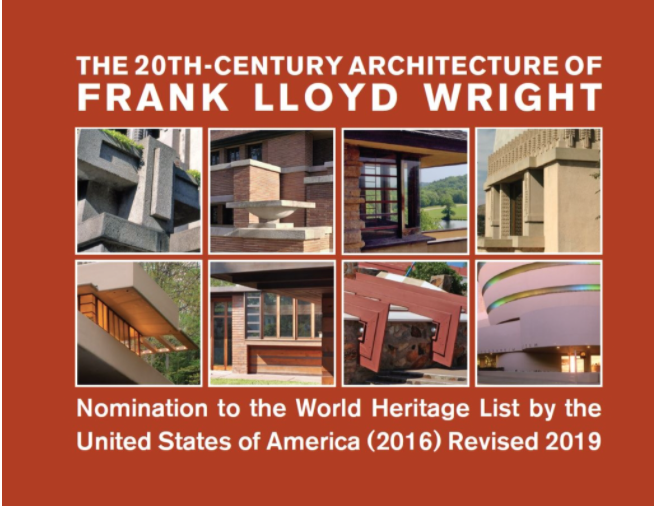 Two years ago, eight buildings designed by Frank Lloyd Wright were officially inscribed on the World Heritage List. Known collectively as The 20th-Century Architecture of Frank Lloyd Wright, the sites were carefully selected to best exemplify Wright’s creative genius and his profound contribution to modern architecture and culture. Since then most of the sites have been closed to the public due to the global Covid-19 pandemic. As our sites cautiously reopen and travel again becomes a possibility, we hope you’ll enjoy this primer on World Heritage and the Frank Lloyd Wright World Heritage serial inscription (as multi-site designations such as this one are known).

World Heritage: Marker of Distinction and Commitment to Protection

World Heritage designation guarantees distinction and promotes protection. This is why World Heritage Sites are such popular tourist destinations around the world: they have been determined by their own countries and the World Heritage Committee to possess Outstanding Universal Value and have conservation plans to conserve them for posterity. World Heritages Sites in the U.S. include Yosemite, Yellowstone, and Grand Canyon National Parks; Mesa Verde and Chaco Culture National Historical Parks; and the Statue of Liberty and Constitution Hall in Philadelphia.

There are many organizations that assist in the selection and designation of World Heritage Sites. The International Council on Monuments and Sites (ICOMOS) provides expert guidance on cultural sites. In the United States, US/ICOMOS works with potential World Heritage Sites and the National Park Service Office of International Affairs (NPS-OIA), which oversees the nomination process.

Sites approved for inclusion on the World Heritage List must be deemed of outstanding universal value and meet at least one of ten selection criteria. The eight Wright sites making up “The 20th-Century Architecture of Frank Lloyd Wright” serial designation are listed under Criterion 2, as they “exhibit an important interchange of human values, over a span of time or within a cultural area of the world, on developments in architecture or technology, monumental arts, town-planning or landscape design.”

In serial World Heritage listings, “it is the series, and not necessarily each of its components taken individually, which is of outstanding universal value.” In this case, the eight Wright sites as a group were produced during an era—the first half of the twentieth century–characterized by dramatic technological and social change particularly in regard to industrialization. Individually, the eight buildings embody new solutions to the early 20th century’s rapidly changing needs for housing, worship, work, education and leisure. As a group, their Outstanding Universal Value lies in Frank Lloyd Wright’s lasting impact on architecture and culture. The buildings reflect the “organic architecture” developed by Wright, characteristics of which include an open plan, a blurring of the boundaries between exterior and interior, and the novel use of materials such as steel and concrete.

Our next essay will feature the Robie House (Chicago, Illinois) and Unity Temple (Oak Park, Illinois) the two earliest sites included in the World Heritage listing.