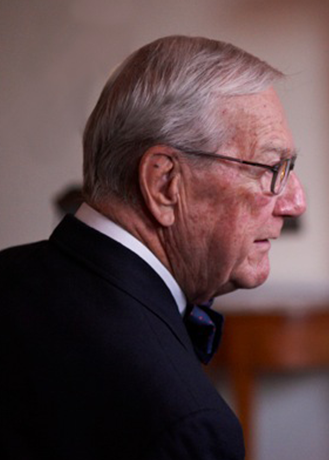 Because of his outstanding service to World Heritage USA from its formative years and his continuous commitment to the ideals and involvement in the work of heritage conservation worldwide throughout his long distinguished career, World Heritage USA is proud to present Dr. William J. Murtagh a 2015 Ann Webster Smith Award.

A pioneer and outstanding leader in the field of historic preservation for more than 50 years, Dr. Murtagh has received both the Meritorious Service Award and the Distinguished Service Award from the Secretary of the Interior, and the Louise du Pont Crowninshield Award from the National Trust for Historic Preservation. He is a Benjamin Franklin Fellow of the Royal Society of the Arts in London, England.

Dr. Murtagh’s expert participation in the early international meetings on conservation doctrine were crucial in aligning the traditional conservation practices that had been developing in the United States previously with the international doctrinal documents that were emerging from ICOMOS during its early years. This in turn, allowed Dr. Murtagh to disseminate this new knowledge through his pioneering academic involvement as Director of the Historic Preservation Program at Columbia University and as the initiator of the Preservation programs and professor at the University of Maryland and the University of Hawaii. He was also the first occupant of the Beinecke-Reeves Chair in Architectural Preservation at the University of Florida.

First published in 1988 and updated in subsequent editions, his important book, Keeping Time, The History and Theory of Preservation in America, which addresses the international roots of the preservation movement, is used as a textbook in classrooms and widely read in the United States and abroad as manifested by its translation into Chinese. Dr. Murtagh was the first Keeper of the National Register of Historic Places in the US and donates the royalties from this book to the Keeper’s Preservation Education Fund he started that is now administered by the Maine Community Foundation, which provides grants to individuals to further their preservation education.

During the time he taught at the University of Hawaii from 1986 to 1998, Dr. Murtagh was also the director of the Pacific Preservation Consortium, which provided training, assessments and additional assistance in addressing preservation needs in other island cultures, such as Micronesia, Polynesia, and Melanesia. His seminal work on the heritage of the Pacific Islands was essential in bringing about a clearer understanding on the part of the ICOMOS community on the inextricable and unique relationship between the tangible and intangible attributes of the rich culture of the Polynesian region. Consequently, his ideas expressed in lectures, writings, and otherwise have helped establish a deeper understanding in both the US and the world of the principles of the 1994 Nara Document on Authenticity, which addresses the complex nature of heritage of all societies both tangible and intangible as it relates to conservation.

Engaging with the international dimensions of heritage as a student, he attended the University of Bonn and the University of Freiburg in Germany on a Fulbright Scholarship in 1954-1955, where he studied German influences on the architecture of the Pennsylvania Dutch. His book, Moravian Architecture and Town Planning, was first published in 1967. As the principal World Heritage USA expert on Moravian heritage, Dr Murtagh led and still is the lead adviser from World Heritage USA in developing a nomination of major US Moravian sites to the World Heritage List. He played a critical role in the coordinating discussions with heritage experts on Moravian sites in Denmark and South Africa in order to develop a transnational approach to the protection, enhancement and inscription of these and other Moravian sites worldwide in the World Heritage List.

Dr. Murtagh has donated his papers to the Special Collections, University of Maryland Libraries. Just a review of the index to the papers amply demonstrates his global engagement and outstanding leadership in historic preservation in the United States and conservation internationally. His representation of the United States and participation in ICOMOS General Assemblies and in conferences, meetings, and study tours around the world are an indication of his contributions. From the very founding of World Heritage USA, Dr. Murtagh has always been generous in his advice to the World Heritage USA National Committee leadership by helping to strengthen the ties of the United States with the heritage authorities and communities in many other countries. In the word of ICOMOS President Gustavo Araoz, “as one of our most committed founders, Bill has always been at the very heart and soul of World Heritage USA by linking the US heritage community with our international colleagues; his dedication and contributions to our growth are a treasure to us all.”